You are here: Home1 / Vidal Sassoon is a Fuckin’ Liar 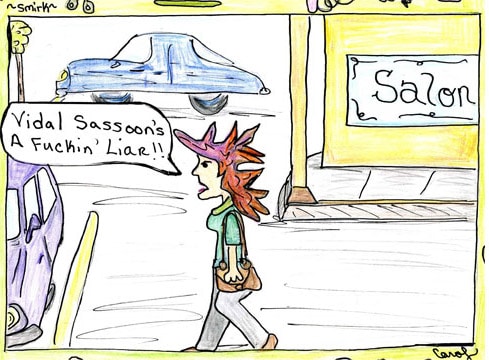 I have to say though, that Lady Clairol saved my butt when I was out in L.A. My sister took me to this famous hair dresser, “Pierre”, that does the likes of Heather Locklear and Lindsay Lohan. I explained to the guy that I wanted blonde highlights but with one thin streak of red in the front. My sister went next door for a croissant and coffee and by the time she came back the job was just about done. I stared at the train wreck in the mirror with the whole front of my head dyed to a bright fuchsia. I looked like a troll doll!! My sister spit out her croissant in little chunks all over this hot pink horror show. “I can’t let you leave looking like that,” she hysterically laughed. She tells Pierre it looks horrible which offends him and he wasn’t so gentle during the second dying. The end result was a disaster to say the least with me and my sister in tears. On the way home we stopped at Rite-Aid and got a box of Lady Clairol doing it a third time that night. It came out exactly how I tried to explain it to Pierre and it only cost $6 bucks! That and the $200 I blew at Pierre’s’ made it a total of $206 bucks. Oy!

Now taking care of one’s hair after all this dying is a whole other kick in the can. I have found that the majority of shampoo and conditioner products are liars. Vidal Sassoon? With curly hair using his stuff I look like I’ve been through a tornado. I look more like Vidal “Monsoon” did my hair. I recently got taken in by the Garnier commercials with Sarah Jessica Parker promising me luxurious locks. She swore on national television that this product would cure my “fly away frizz.” Well I couldn’t get a comb through it. I broke the handle right off the brush fighting to get it through what had turned into a brillo pad on my head. So now I’m stuck with a whole bottle of both shampoo and conditioner of a product that is making me look like Little Richard. The dog didn’t even like it when I tried the stuff on him. He went from looking like a collie to a poodle. Another lesson I’ve learned is no matter how enticing it looks don’t ever buy shampoo and conditioner from the dollar store. There are a list of reasons why it’s in the dollar store. You’ll be riding the S.S. Baldy cruise on a journey to “all-your-hair-falling-out-in-clumps” land. It’s not a happy place.

I honestly don’t think there’s a product alive that could tame my mane. A little girl told me last Halloween that I should go as a witch since I already have the hair for it. No matter what I do I always look like I just crawled out of a ditch after a night in the county lock-up. Too bad “electrocution” wasn’t a popular look these days — I’d be a trendsetter. At least in the 80’s I fit in with that “big hair” trend. I can’t imagine why God thought this was a good look for me. Clearly we can rule God out as being skilled in the beautician career category. That could be a slogan for the hair styling industry: “God is not a beautician that’s why he made hair stylists.”

So I’m just going to accept that I’m going through life looking like witchy-poo. I told my friend Karla, that I was finally just gonna go natural and say to hell with it and turn gray already. She laughed and smirked, turning her eyes to her crotch while pointing, “Wait till it ALL goes white. Being a black woman I have to deal with a white streak down the middle and it makes me look like a skunk, so stop complainin’ ya silly little white girl.” An atomic mushroom cloud went off in my head at the unthinkable. Oh, Hell no. I just about got a ticket screeching to a halt at Rite-Aid in search of my best friend, Miss Clairol.